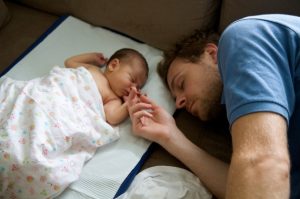 Increasingly, dads are choosing to play a primary parenting role in the lives of their kids and families. And they’re doing it for a variety of reasons: emotional, cultural and economic.

But don’t for a minute think that society’s attitude to what has traditionally been considered “women’s work” is changing as fast as individuals and the economy. The recent Salon piece Rise of the Dad Wars examines the social resistance experienced by primary parenting dads.

A new generation of men want to be more involved in raising their kids — shaping who they will become in the world while enjoying the many benefits of child-rearing. Somehow these guys have shaken off the social conditioning that streams them from a very early age into the financial provider role in their families. This is partly a product of observing their own fathers in the hard-working provider role and choosing a different reality for themselves. It’s also partly because our economy is starting to value women’s contributions more and in some cases even favor it. In many families, it just makes good economic sense for mom to work outside the home and for dad to stay home and anchor the family duties.

Families don’t just run themselves, any more than children raise themselves. (Wouldn’t it be great, though, if homes cleaned themselves or dishes washed themselves.) If you want a family, and many of us do, it needs to be created, nurtured and supported. Like anything that ever gets done in this world, someone needs to take the lead.

I call that someone the primary parent and it’s traditionally been a woman’s role in most family arrangements. But it doesn’t have to be. In fact, other than gestation, birthing and breast-feeding, there’s little in primary parenting that a man isn’t as capable of doing as a woman. The problem is, men are often not raised for this role and so we do not acquire the required skills, both emotional and practical.

And this is at the root of the antagonism toward men who find themselves in this role. Family traditionalists assume a kind of biological determinism that underlies their gender role biases. And our culture framework for happiness, which is viewed as the inevitable product of professional achievement and financial reward, places massive pressure on men — and increasingly women — to pursue careers at all costs.

Men who pursue their desire to be active, engaged and primary parents are met with social judgements from both sides: from other men/fathers who have not made this choice, as well as from other women/mothers who can be uncomfortable with the incursion on their primary parenting role.

To be sure, there is lots of open-mindedness out there about the new roles dads are playing, but we’ve all got a long way to go to make primary parenting a viable and socially supported choice for more dads.