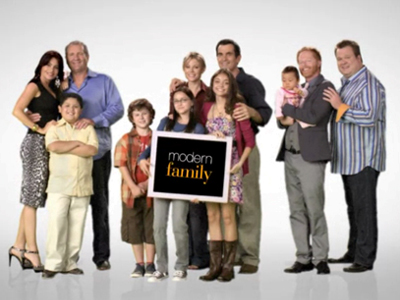 My family loves watching Modern Family. We all enjoy the show and we enjoy watching it as a family activity.

Now before you judge me (and, trust me, I judge myself) for citing television watching as a meaningful family activity, let me explain why I feel this way.

If you haven’t seen it, Modern Family is an award-winning show that gives television a good name. It’s brilliant! The writing is subtle and clever and very funny. Like all great family entertainment, it operates on both the kid and adult levels at the same time. We’ve tended to watch the shows on DVD, rather than regular television, and this really brings out the rhythm of the editing and the comedic timing of the show. The show is compelling because the characters are credible reflections of real world people — some you know well and some whose skin you live in on a daily basis — and the story lines are rooted in reality but just way funnier.

We like the show for other reasons too. Modern Family posits an inclusive view of family that reflects some of our family’s basic views and values. For instance, there is no such thing as an ideal family. Families, in the real world, come in all shapes and sizes — just as they do in the show. Some are built around heterosexual relationships, while others blossom around same-sex spouses or second and third marriages and relationships that span generations. And no family’s life is perfect — people fight and act selfishly and sometimes do mean things to each other. But, in the end, families come together. Or that’s what they’re supposed to do anyway. In these ways, my family is a modern family too.

Admittedly, I wondered whether we were on the right path when we started watching the Modern Family Season 1 DVD on a recent family vacation. But we were all enjoying the shows and we were on vacation. A few clarification questions arose and were answered about some of the more adult themes in certain episodes and we handled them as best we could. The fact is, there’s not much going on in these shows that isn’t starting to creep into the schoolyard chatter among kids finishing grade 3. The way I see it, there are lots of way worse ways for kids to be introduced to more mature subject matter than watching a witty and insightful comedy like Modern Family together as a, well, modern family.

I guess I am a product of my generation in this regard. I grew up in the 70s and watched my fair share of television back then. I learned a lot about the world and interpersonal relationships from shows like The Mary Tyler Moore Show, Rhoda, Three’s Company, and All In the Family. I’m sure I missed some subtleties, but I picked up on the broad strokes of Archie Bunker’s racism, Rhoda Morgenstern’s feminism and Jack Tripper’s intentionally ambiguous alternative lifestyle.

More significantly, I was influenced by the setting in which these shows were watched. In the evenings, my younger brother and I would sit and watch with my recently separated mom, sipping our cups of warm, sweet tea and eating homemade dessert. Those shared experiences with our  extended TV families brought us closer in our own little family. It also validated us. It connected us.

That’s why I love that we all enjoy watching Modern Family together. And that’s why I don’t worry about the appropriateness of some of the content. Because as long as we’re all sitting together and laughing, there is so much more going on than just watching television.