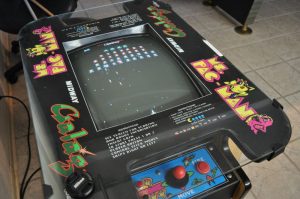 n my early 20s, I worked in a lot of restaurants for summer employment. During those summers, the days were short and the nights long. Dinner restaurant shifts would begin between 4:30 and 5:30 pm and end anywhere 10:00 pm and 1:00 am, depending on the shift and the traffic.

Shifts would start with coffee and end with coffee and be fuelled throughout with, you guessed it, coffee. By the time I’d been through a dinner rush and a few waves of smaller later rushes, I was tired, wired and ready to cash out.

Coming down from this high intensity, go-go-go environment started as soon as I cashed out. Flush with quarters, I’d plunk myself down at the Galaga console and start ‘er up. Galaga is a fixed shooter arcade style game that was released in the early 1980s by Namco of Japan. The game features insect-like creatures that assemble on the screen and then proceed to attack your fighter ship. (Of course, there’s a whole Wikipedia page on Galaga written by nerds with too much time on their hands, should you be looking for more details.)

Being an early arcade game, Galaga has a very limited set of actions, features and sounds. When you play the game over and over, you learn these patterns and develop a strategy for beating the game which feels more like a rhythm than anything else. With the caffeine still pulsing through my veins, I found this game to be a relaxing outlet at the end of a restaurant shift.

Fast forward 25 years to our vacation home that we rented in Palm Springs this season. We knew there was a games room, but when I  discovered an original Galaga game console – the cocktail version with the glass top just like the old days – I was jacked.

I sat down to play for the first time in 20 years and slowly it all came back. The strategy of how to move, the familiar sounds, the game structure. Game after game I jammed the joystick back and forth and pounded on the shooting button. The rhythm started coming back.

I effused excitement to the kids, who watched quizzically as their dad got way into a weird looking video game. As my scores climbed and my confidence grew, they became enthusiastic fans cheering me on. They event tried playing themselves and starting getting into it – in a retro way.

After a few days of this, my son came to me and excitedly announced that his fighter got captured. Oh yeah – the light bulb went on. I forgot completely this feature of the game that allowed one of the bigger flying insect to capture your fighter which you could then rescue by carefully shooting the bug holding your fighter. The resulting double fighter gave you twice the fire power and point aggregation potential. A whole new dimension to rediscover!

There is no real moral to this story, except perhaps a realization that though video games get technologically better with time, that doesn’t mean they get more enjoyable. Galaga came from a simpler time in gaming – the joystick moves left and right and the button shoots bullets. That’s about it. The game’s objectives and strategies are dead simple. By playing the game frequently, it becomes more about the joy and relaxation of its rhythm, than winning. Though winning is fun.

I don’t play many video games these days, but the ones I do play have the same traits: they’re simple and my enjoyment comes from the relaxation they offer to my fully scheduled mind.