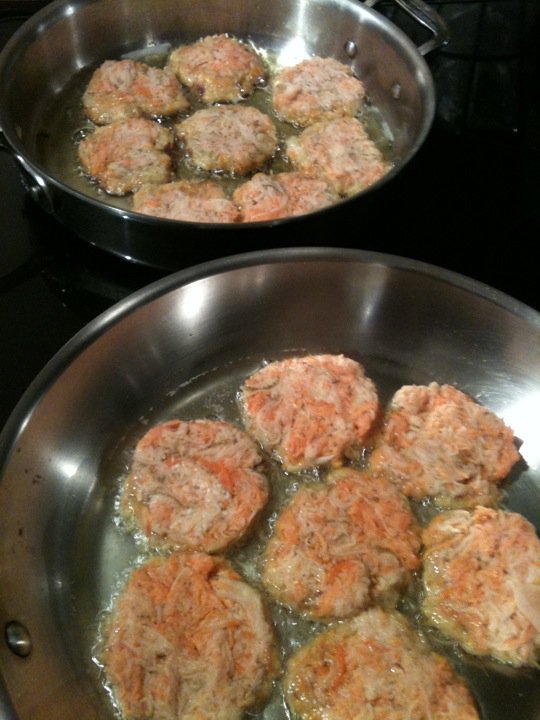 Hanukkah is the festival of light…and oil. As the tradition goes, the Maccabees won the war, but the Temple was destroyed in the process. When they returned to the rubble, they found only one intact jug of oil still bearing the high priest’s seal – enough for one day. Yet the oil burned miraculously for eight days.

Hence, at Hanukkah we eat foods cooked in oil. In North America, that tends to be potato latkes. I make a non-traditional latke receipe, inspired by the wonderful Moosewood recipe (see page 169 of the original hard copy edition). Here’s the ingredients:

1. Grate potatoes (I use the fine grater attachment on my food processor) and place in colander in the sink. Salt liberally, working the salt into the grated potatoes at let sit for 10 minutes. Then squeeze the heck out of them, getting rid of as much water as possible. Place in large bowl. Grate sweet potato, carrot and onion and repeat salting and squeezing process. Add to the potatoes.

2. Beat two eggs. Add crushed garlic to eggs and mix. Add pepper. Then pour seasoned eggs into grated potatoes, carrots and onion mixture. Add flour to absorb some liquid and generally gum up the mixture. You probably don’t need more salt at this point if you were liberal with it in step 1.

3. Make small round patties and fry in vegetable oil. Smaller patties are easier to cook through. There should be enough oil so that the edges latkes are immersed but not the tops and the oil should be medium heat – you don’t want overly rapid cooking or burning. Flip the latkes half way through until both sides are golden brown.

This should make about 12-18 smallish latkes. Double, triple or quadruple as required.

And don’t forget to eat your latkes with apple sauce or sour cream.

As your savouring their wonderful, oily, carb-loaded flavour, you should consider the perennial question asked in Jewish households all over the world at Hanukkah – “Why don’t we make these things at other times during the year? They’re SO good!”