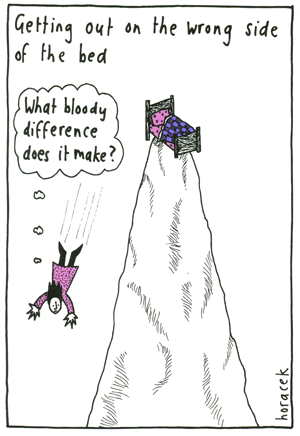 Some days, you just get up on the wrong side of the bed. You know that feeling?

That was my day today. I woke up and had a sense that I should just cancel my planned activity and work from home. Instead, I ignored my gut and pushed on out the door.

It started with the kids being late for school – which made me late for my event. When I arrived, the room was almost full. As I tried to sneak in quietly, the heavy door clicked shut loudly behind me. Everyone turned around to look. I headed for the only seat I could see, right up in front of the speaker. The chair scraped noisily across the floor as I tried to discreetly sit down.

My first errand of the day should have been a portent for things to come. An envelop had been left for me at the mailroom of a downtown office tower. When I arrived at lunch time , the mailroom was closed. Out for lunch, no doubt.

So I headed back to my home office to try and get some things done. The first thing I did upon arriving was change into more comfortable attire. I remember leaving my wallet on the dresser and thinking I’d just grab in on my way out. Silly me. It was just one of those days.

The task that had sent me rushing back to the office to complete was now the focus of my attention. I was composing an important email – reading and rereading it to get it just right. The moment after I clicked send, I got an auto-response informing me the person was away until Monday. Guess I could have been working on something else today instead.

I first discovered I didn’t have my wallet while standing with a half full shopping cart at the grocery store. I left the store and my cart half full of groceries in the vegetable aisle and took my son home to make him dinner. I could shop later while the boy was at his King Fu class.

I discovered I didn’t have my wallet the second time while standing at the post office counter trying to mail a signed contract and $600 deposit for a vacation rental next spring. Quite annoyed with myself at this point, I placed the envelop with the contract and $600 in the breast pocket of my coat and I remember thinking that the pocket wasn’t very secure and that I should make sure I put the envelop somewhere safe when I got back to the van.

That was the last time I was aware of the envelop until I was looking for it so I could return to the post office and the grocery store – with my wallet – and complete my tasks for the day.

Tracing my steps back to the post office, the coffee shop, the Kung Fu class – everywhere I had been in the previous few hours – I searched for the envelop with the contract and the $600.  Nothing.

How did I lose that envelop? And how did this whole damn day happen? I was so frustrated by the forgetfulness and the bad timing. I wouldn’t be standing there at all if I hadn’t forgot my wallet twice – not once, but TWICE – during the day. I wanted to scream.

Right about then, I became aware of the the faint Christmas music coming from the speakers in the ceiling. I confess that, despite my Jewish identity, I have a soft spot for certain Christmas songs. They remind me of my Jewish convert mother who could never let go of her own emotional ties to the Christmas season and passed some of it onto me.

Standing there and hearing those tunes made me crack. I’m not much for crying – I usually hold it together pretty well. But at that moment, I was so fed up with my day and feeling so helpless to change it that the tears came.  They welled up behind my eyes – tears of frustration, hopelessness and sadness – all rolled into one.

It was just one of those days.