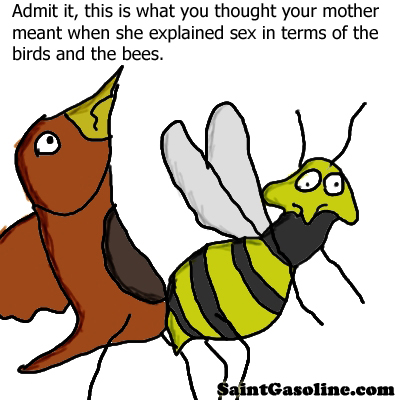 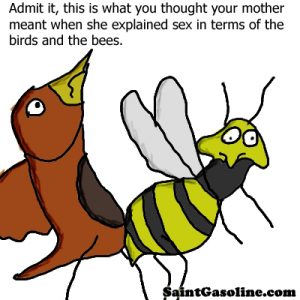 I never did understand the term “birds and the bees“.

I mean, I know what it idiomatically refers to. I’ve just never understood what birds and bees had to do with explaining sexuality to kids. As if kids already understand the reproductive biology of other species in nature and this is going to help them understand human reproduction?

As I’ve mentioned in another post, our family has developed a love for the show Modern Family. And this show has prompted some interesting question from our nine year olds.

In a recent episode, Phil finds a couple of boxes of condoms in his daughter’s bags as she’s heading off to college. My nine year old son jumped on it.

“That’s exactly what mom said when I asked her.” They had watched the same episode with my wife the previous night.

Fast forward a few days and some other mention of condoms triggers the same question. I pause, gathering my thoughts and plotting a strategy, before answering.

“Let’s start at the beginning,” I say. “Do you know how babies are made?”

“The man has a seed and the woman has an egg.” Impressive, I think to myself.

He points embarrassingly to the general area of his genitals and giggles appropriately.

“So, how does the seed get to the egg?” I probe. Here comes the punchline.

Clearly, we had some basics to review.

I began to explain where a penis needs to be placed in order to deliver the seeds, but could barely finish amid howls of embarrassment and feigned disgust.

“And so a condom goes over a penis to stop the seeds from coming out,” I concluded. “And to prevent disease…” I hastened to add, quickly trying to decide whether I wanted to head into the worm hole of sexual health or stick to the basics of biology first.

But that was the end of the conversation.

He’d gotten his answer and clearly wasn’t going to be having any more of this conversation. For now, anyway.

But there’s lots more to cover.