There has been lots of media coverage over the past days about the Conference Board of Canada’s report on the deplorable absence of female executives in Canadian corporations,  but little discussion of the real issues underlying the grim statistics. The situation is not much different in the US, where women executives have also appeared to hit a glass ceiling.

Executive roles are very demanding. The hours can be long and the accountabilities significant. You are expected to be available at any time your role needs you which means you often miss important events in your family life and can start to feel you have little control over your time. This fact, combined with the often crushing responsibilities of executive roles, can be very stressful on a person.

For people who want it all – a healthy marriage, a rich family life, a social life, etc. – in addition to their high-powered executive life,  they need support. 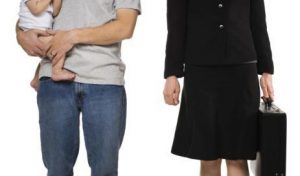 Behind every successful married male executive is a spouse, usually female, who ensures most other aspects of their lives are managed effectively – kids, home, finances, social, etc. Even if there is help in the form of extended family or hired staff, one parent needs to take the lead in directing and managing this help. And that parent way more often than not is the mom.

There are lots of reasons for the lack of women executives – and solutions to this problem – but this is not a complicated problem to solve. It’s not at all about lack of ambition or capability on the part of women, as some media reports suggested. It is partly about a persistent and rank chauvinism that still thrives in macho executive circles.

But, in my opinion, this problem is fundamentally about social organization. As long as women bear the brunt of family management duties, they will be limited in their executive roles.

In order for there to be more moms who are executives, there needs to be more dads who are homemakers.