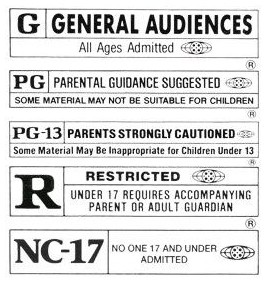 I am a bit ticked off by the movie rating system.

We are led to believe that G rated movies are family friendly and, in the absence of the PG rating, that we don’t need to make any judgement calls. But that is not quite true, in my experience.

It is interesting what we are warned about in PG ratings: “violence” and “mature language” seem to be the most common concerns we are thought to have. I do feel strongly about not desensitizing my kids to violence, so I agree it is important to know what violence will be experienced in a film so you have an opportunity to say no. By the same token, the mature language that they will, in time, learn on the street has no place in a seven year old’s vocabulary.

Yet, G ratings are notable for what they don’t warn us about. I’ve noticed that a fair bit of “sexism” and “sexual innuendo” and “sexualization” can be found in films that have a G rating and I am troubled that we are introducing 3, 4 and 5 years olds to these concepts. The rampant stereotyping of male and female roles is teaching a sexism that must be unlearned later – or not. It is also not uncommon to see younger boys eying (or whistling and hooting at) attractive women 10 or 20 years their senior in ways that I think is inappropriate and that a six year old doesn’t need to learn. And few and far between are the young female stars who are not being made into objects of attraction and desire to their audience – the boys and their fathers.

According to these ratings systems, violence requires “parental guidance”, whereas discrimination on the basis of sex is wholesome family entertainment.

I’m not a prude trying to say we should not see any aspects of human sexuality depicted on screen. I just want that sexuality to be healthy and age-appropriate. And I wish they’d stop sneaking the unhealthy, inappropriate crap into our kids heads disguised as G rated movies.