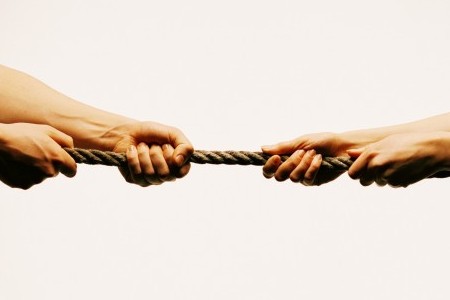 Marriage and parenthood is about nothing if it isn’t about compromise. But there are some unique and significant adjustments that usually have to happen when men take on the role of primary parent.

First, expect to meet some resistance – from your kids, your spouse and even yourself.  Kids aren’t used to the whole dad being at home thing. If it’s all they know, then they get comfortable with it on a day-to-day basis, but it takes time. But once they’re in school, the majority of their friends will come from traditional dad-works-outside-the-home homes –  unless you live in an urban oasis of progressivism and alternative lifestyles (you know who you are and it ain’t like that everywhere else). And kids talk in the school yard. Your kids may have a hard time seeing what you do as a parent as work. Moms know that feeling. And it was ever thus.

Your spouse is a whole other question. She thinks deep in her sex role conditioned psyche that what you’re doing is “woman’s work” and that she should really be doing it. You see, she may be a wonder woman in the business world, but periodically she feels guilty for not being around as much. She may even start to think she’s a “bad mother”. Exacerbating this situation is that fact that if she isn’t around and you’ve taken primary responsibility for the parenting, then you are making all kinds of decisions about which she has opinions but less opportunity to act on them.

As much as possible, you need to be consulting and sharing and making these parenting decisions together, jointly. You need to see your role as facilitating the wishes of your co-parent, even when she is absent. However, you’re the new general manager and you need to make the daily calls. I personally find this power-shift very rewarding. But it only works as well as it does in our house (I think) because my spouse accepts that fact and I try to represent the parental consensus in the way I govern, so to speak.

As you get more comfortable in your primary parenting role, you can start to feel like her involvement is stepping on your toes. Be careful here. Parenting, in my experience, is best done on a shared basis. Don’t let your ego get in the way of doing the best thing for your kids.

Of course, as a dad who’s primary role is to be a home maker and care giver, you may find yourself feeling like you should be doing more with your life – building your career, earning money, paying others to clean your house and iron your shirts. You’re feeling inadequate – as a man.

Rest assured, most people – men and women – in your role have days when they wonder that. But you are doing some of the most important work you can do for your family and kids. And you are breaking down sex role stereotypes with every day that passes. In that sense, you are leading a social revolution that will have massive implications for the society in which your kids become parents in 20 or 30 years.